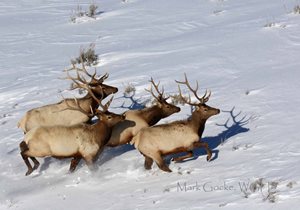 Chronic wasting disease (CWD) is a fatal neurological disease of deer, elk and moose, which was first detected in wild populations in Wyoming in 1987. Game and Fish is accepting public comments until April 1, 2016. The draft proposal will be presented to the Wyoming Game and Fish Commission at their April 21-22 meeting in Casper.

“In an effort to better manage ungulates we want to continue to improve our understanding of  this disease,” said Scott Edberg, Deputy Chief of the Wyoming Game and Fish Department’s Wildlife Division. “The public and partner agencies gave us some good suggestions to make sure we have a strong plan and we appreciate that feedback. We hope people will be involved as we finalize the CWD plan.”

The CWD plan focuses on disease management, research, public information and funding. The draft calls for the continuation of robust surveillance and public involvement, as well as continuing to invest in research here in Wyoming. The latest draft includes the stated goal of ultimately eradicating CWD, it has more of an emphasis on research, includes additional language about coordination with other agencies like the US Forest Service and with nongovernmental entities, recognizes the role of predators in diseased animals and adds actions to be taken if CWD is found at an elk feedground.
The public can view the draft plan on the Game and Fish website. Comments will be accepted online or by mail.

For more information on chronic wasting disease transmission and regulations on transportation and disposal of carcasses please visit the Game and Fish website at: https://wgfd.wyo.gov/Wildlife-in-Wyoming/More-Wildlife/Wildlife-Disease/Chronic-Wasting-Disease.

Sheridan – In 2019, the Game and Fish Department’s chronic wasting disease surveillance program shifted from monitoring distribution and spread of the disease to concentrated focus on selected deer and elk herds in each administrative Read more…

Game and Fish continues to notify hunters of new areas where CWD is found. 2/3/2021 2:30:37 PM Cheyenne – The Wyoming Game and Fish Department has confirmed a new deer hunt area in the Cody Read more…

CHEYENNE – The Wyoming Game and Fish Department has confirmed a new deer hunt area that is positive for chronic wasting disease (CWD).  CWD was confirmed in Deer Hunt Area 138 with a positive test from a Read more…